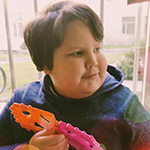 I am Nina, Saba’s mother.

I can’t not express admiration to all staff of Mardaleishvili medical centre.

My son is 11 years old now. We had first transplantation of stem cells taken from my son’s own bone marrow in May 2018. Before this procedure he wasn’t talking, his behaviour was awful, he had no contact with anyone, sometimes he was even aggressive. After 4-5 weeks from the first transplantation his speech became much better, he became more calm and began to contact with other people. That’s why I decided to do the procedure again after 1 year. We had second transplantation on May 2019. We have so great results, that sometimes I can’t recognise my own son. He is attending whole 6 lessons at school, learning to read and write, talks nearly everything and communicates with kids.